skip to main | skip to sidebar

It's not that I haven't been blogging, it's just it's all over in the new blog.

So if for some unfortunate reason, you have been directed here by a naughty link, go there, go find out what I've been ranting on about. Go on, you know you're curious.

Right now, I'm evicting plants from the garden. Who will be next? Varigated Dogwood? Wild Choke Cherry? Chinese Lantern (as if I could evict it).
Posted by Ottawa Gardener at 10:10 PM No comments:

I am writing a sub-blog which will chronicle my gardening transformation as I re-imagine what it is to have an urban veggie patch. This blog will take over Ottawa Hortiphilia for the next year or two:

Back from the wastelands with a project

Yes I'm back and instead of telling you all the far too exciting story of my journey, I have been thinking. About what? What else but gardening. I have a project planned and it is a big one. So big in fact that I am going to start a special 1-2 year long garden blog entirely devoted to it.

All will be revealed once I finally download all those holiday pics so I can have my illustrative device back.

I was just on Gardener's Anonymous' Blog and saw the update of her spiral garden which inspired me to update you on my spiral garden. It's exploded into life this year and as of yet has not heard of my plots to rearrange and expand it.

Welcome to the main path: 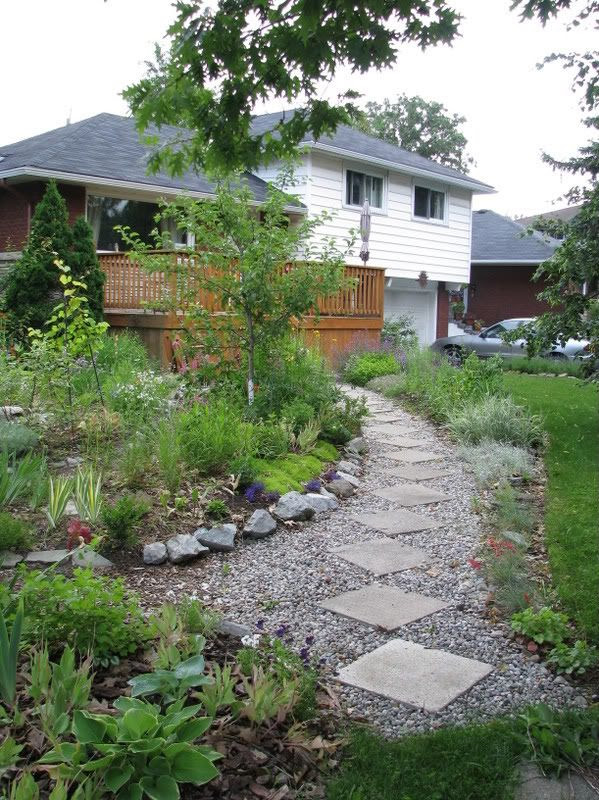 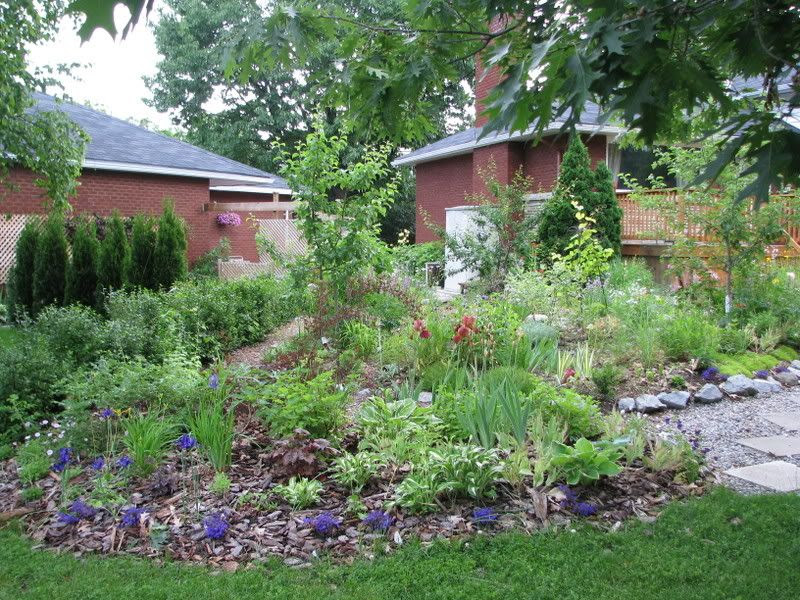 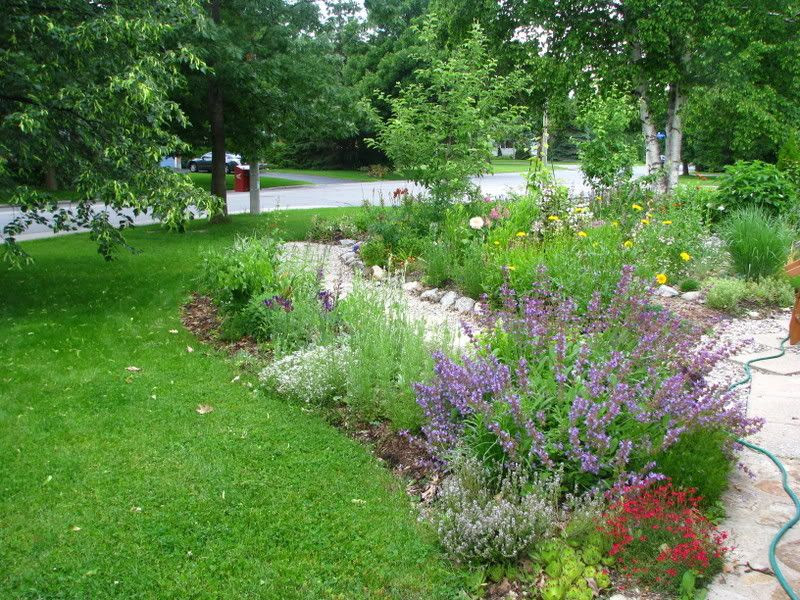 Sorry, I don't have any pictures of the centre of the spiral but I've changed it around, moving my delphiniums to the front and replacing them with an dark leafed, hardy abelia. Anyhow, it's in for more changing in the coming months and years. The spiral itself is most visible in the spring and fall when most of the herbaceous material has died down. My intention was to have ungulating layers of vegetation so that you play peek-a-boo as you are walking through it until you get to the centre where there is a stone bench for sitting.

Small spiral garden
Scroll down for a spiral rowed veggie patch
Posted by Ottawa Gardener at 7:41 AM 8 comments:

It's been awhile and garlic harvest

While I was gone, several people had kindly volunteered to take care of my garden. Happily for the weeds, one of them was unable to fulfill his obligation. My veggie patch was a verdant field of green crabgrass, lamb's quarters (though I would have liked more of those tasty wild greens), and so on. I weeded until my hands were sore and then I weeded some more. Before I go on the second half of our summer journey, I will mulch heavily!

As we are about to head off again, I harvested the garlic. 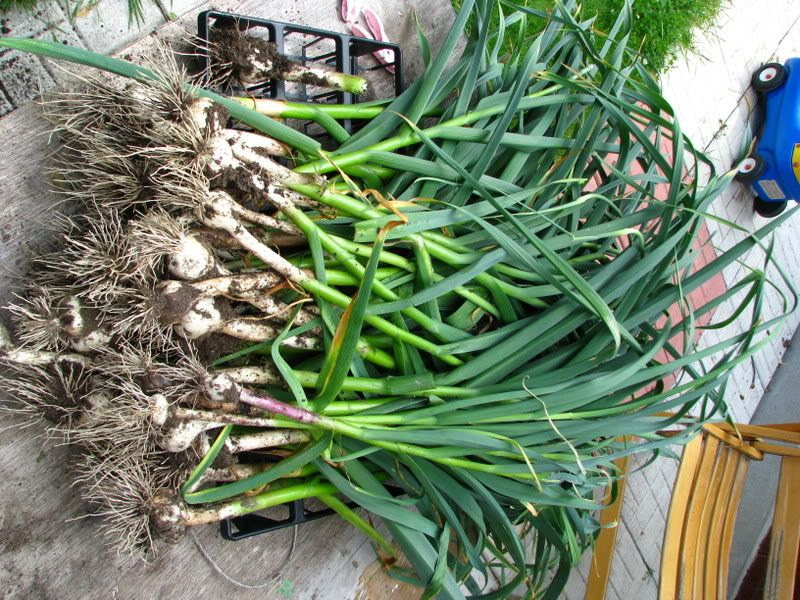 This year I tried to plant enough to have extras for replanting in the fall. Tempting as it is to keep the biggest bulbs for eating, I must replant those best ones to help my crop improve year after year. Of course, some of the bulb size variability has to do with luck, like being planted on top of slightly richer earth or with slightly more space, but there was definitely some difference in the variety of garlic. Don't ask me which ones I planted, sometimes I am a bad record keeper but those more successful garlic will be replanted in the fall. Of course, I will also include some of the other varieties in case the weather next year is vastly different and by chance they will be more successful.

I also was surprised to see that I had missed harvesting some garlic last year. Here is what it looks like in its second year. You can see they grew into bunches of 'pearl' garlic without any cloves. I will replant these in the fall too and see what happens. 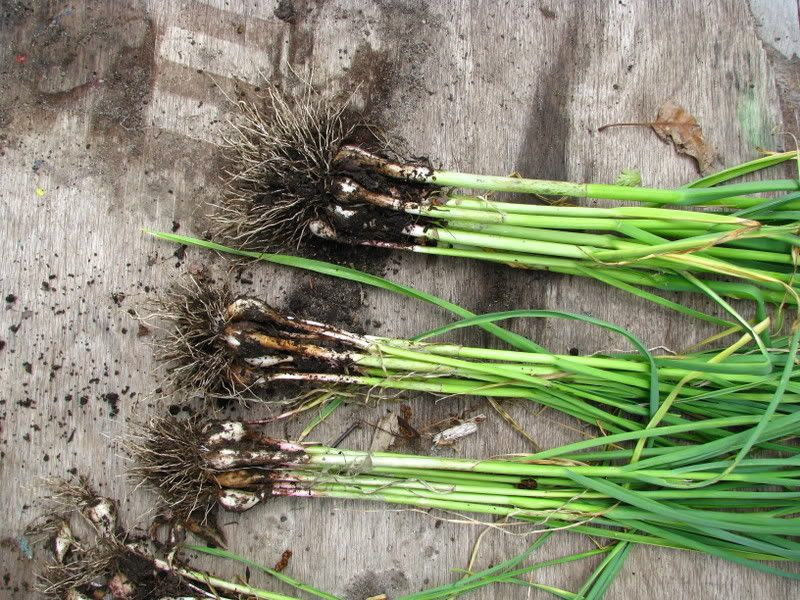 See you in August!
Posted by Ottawa Gardener at 10:16 AM 3 comments:

...Spring bulbs, No snow, and making a break for it. 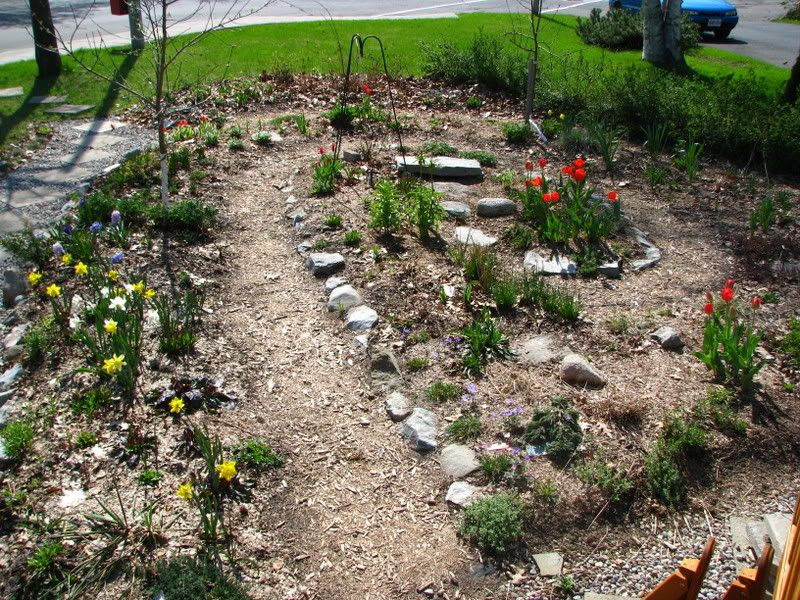 Many of you garden geeks out there will have read Tulipmania so what I am about to explain is like so 'old news' to you but let me bore you to enlighten others. A long time ago, in the era of Rembrant (1700th century), the artsy and otherwise susceptible communities in Europe were seized with Tulip fever. Bulbs began selling for incredible debt-defying prices. Some of the most prized bulbs sprouted striped flowers. The striping pattern was unpredictable and many, many years later it was discovered that this novel pattern was created by a mosaic virus specifically the Tulip Breaking Virus (TBV - actually according to one source five viruses can cause it). 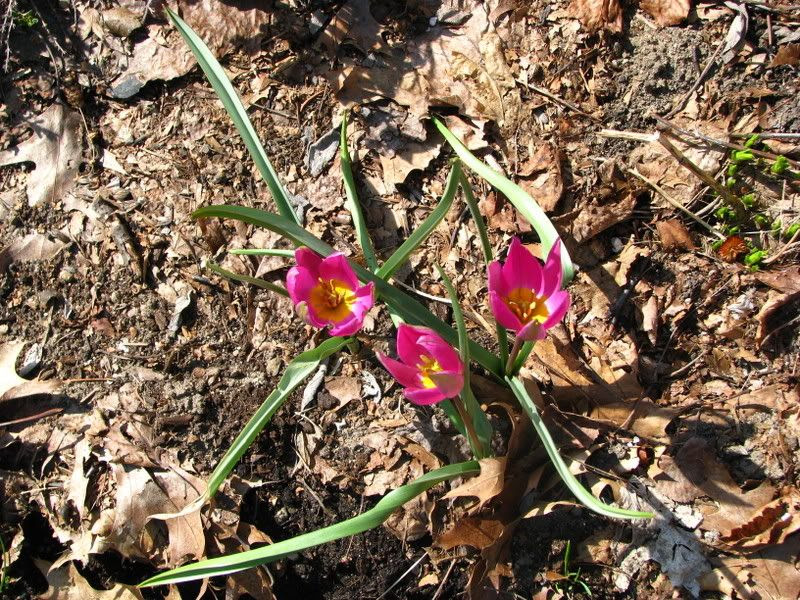 I had filed this, wrongly, under my mind's history files figuring that they only sell clean tulip stock now. I was right that so called 'Rembrandt' tulips on the market nowadays are not affected by the virus(es). 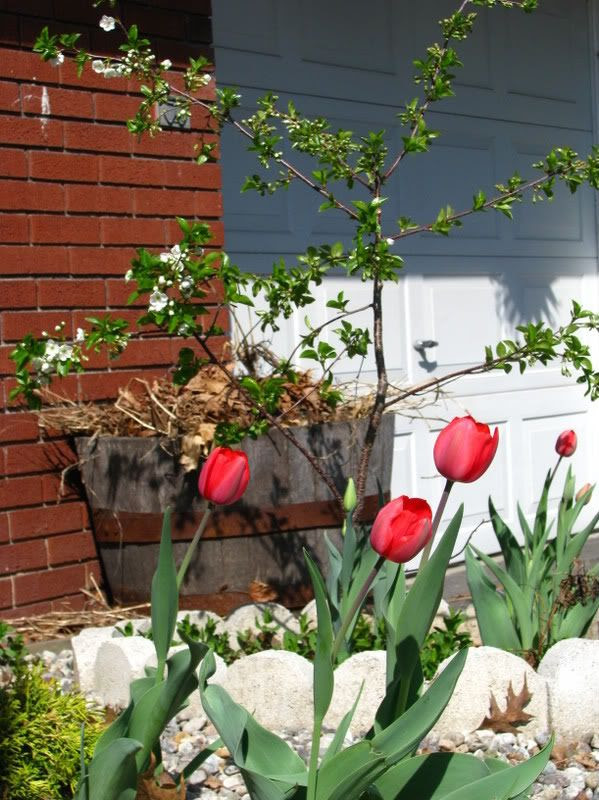 Tulips planted by previous owners many years ago replanted and then covered with gravel which they dutifully grew threw. When I originally dug up this clump of tulips, I swear there were a hundred bulbs in a square foot so who knows how long they had been there. A couple years of replanting the tiny bulbs, they were flowering size, I guess. I think these are the classic red Darwin tulips but I'm not sure.

However, stock still exists of true 'broken tulips'. Old House Gardens Heirloom Flower Bulbs is willing to infest your spring planting design with these ailing beauties. However, they do suggest you plant them away from unbroken tulips and other members of the lily family for obvious reasons. However, maybe you are curious about what would happen if you committed biological warfare on your unsuspecting tulip stock. I'm not suggesting you do... just saying.

A squirrel planted this one. I wonder from which neighbour it came? Random yellow and red tulip near the varigated foliage of red robin greigi tulip. 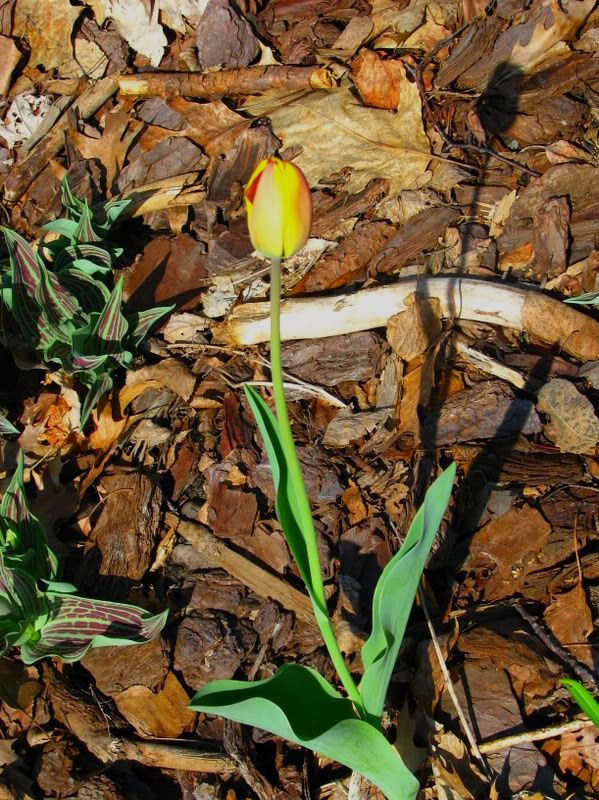 Squirrel planted tulip. I wonder which neighbour it came from. It's sitting besides ome Greigi tulips with their varigated foliage.

Links to more on broken tulips:


Other Signs of Spring 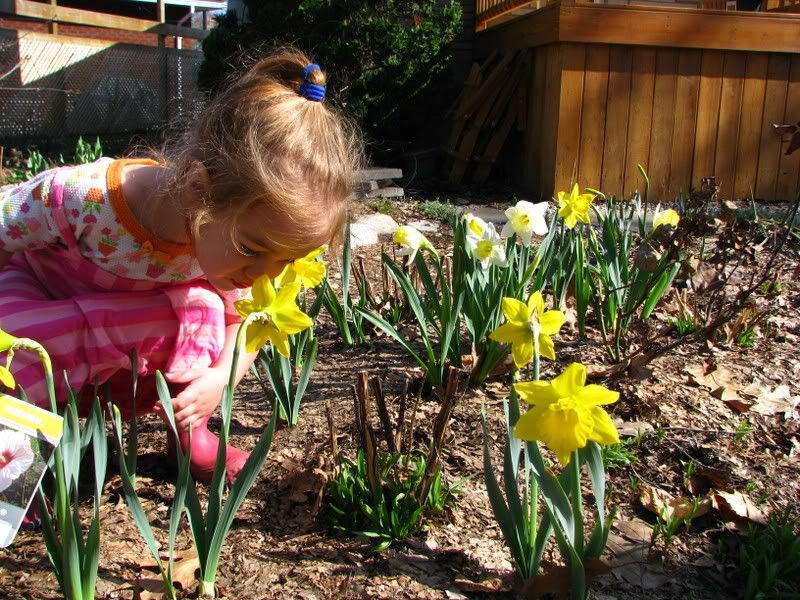 Spring in fast forward - we went from crocus to daffs to tulips in what seemed like time lapse photography after several weeks of unusually warm weather. 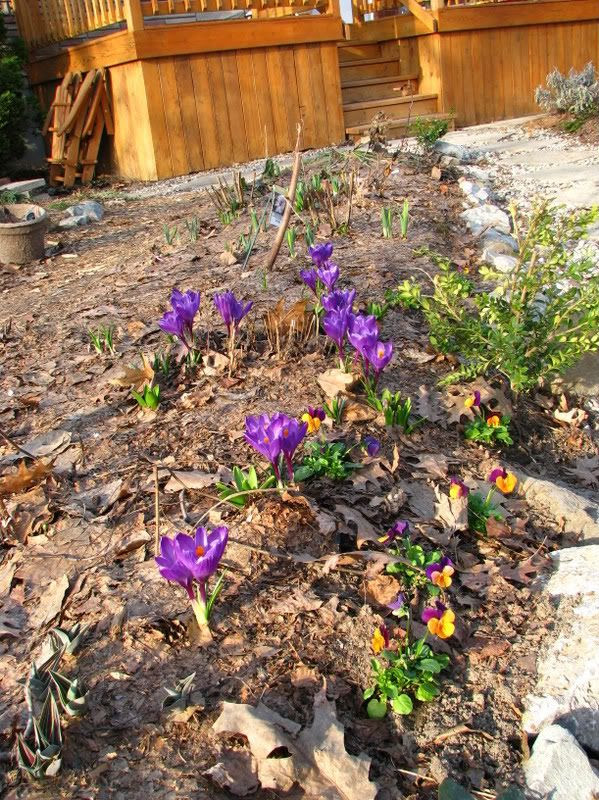 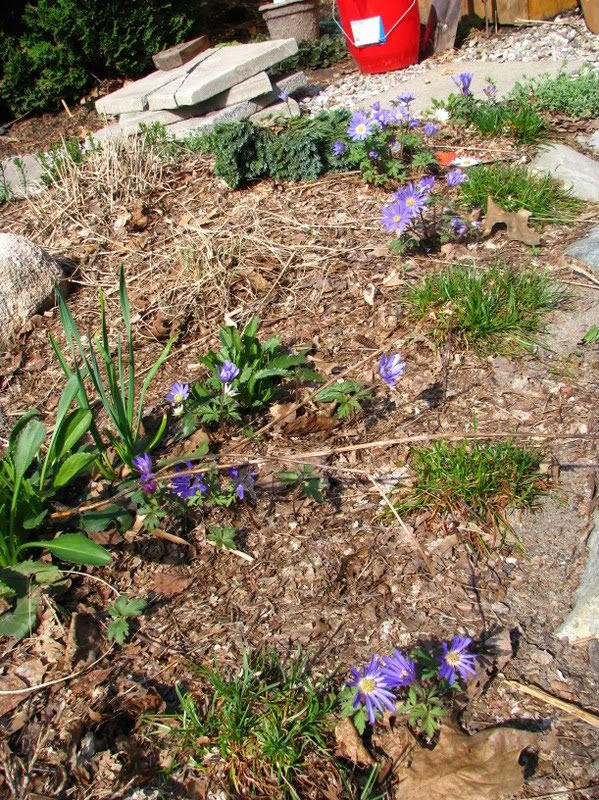 Making a break for it:

I'll be signing off for awhile as we are heading on some really long trips. In the meantime, I wet my plants, has offered to come around occasionally and pull a lamb's ear about to set seed from my garden, so please feel free to read her adventures in Ottawa. I'll also have a friend from around the block who wants to play in my veggie patch so perhaps he'll make some updates. We'll see.

See you in August! 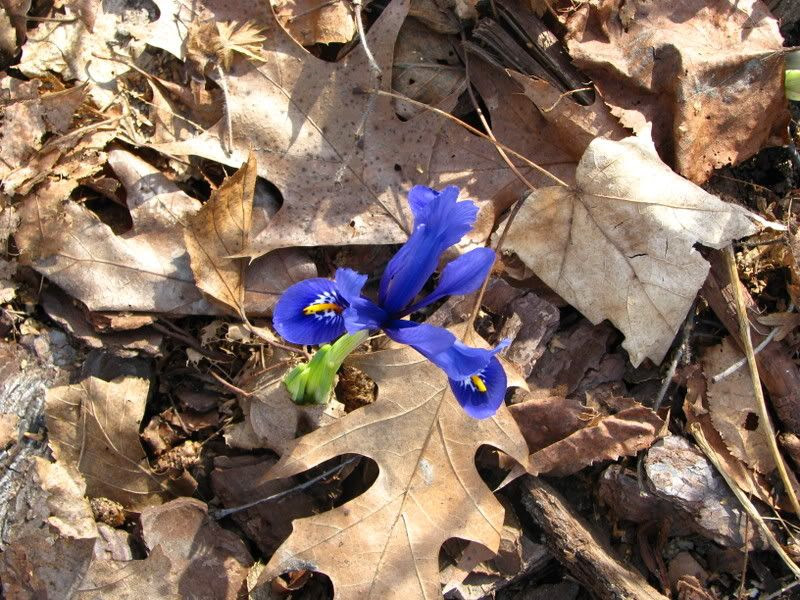 One more gratuitous flower shot
Posted by Ottawa Gardener at 5:07 AM 4 comments:

It's not just me.

I thought it would be nice to explore a modern buzz word - local - by finding out who else blogs in the Ottawa Valley about gardens. But here's the thing, there used to be more of us! Now all I can find are the following two and I could pick both of them out in a crowd:

I Wet My Plants - you've heard of this intrepid blogger before. I suspect she's deep in spring seed fever like me right now. We met through plantcycle (much mentioned plant exchange site).

Common Ground - a CSA plot blog/adventure. Talk about a small world - Our kids used to play together.

Anyhow, check them out, leave some comments if you like, read a bit about gardening in Ottawa.
Posted by Ottawa Gardener at 7:15 AM 4 comments:

What's going on in the garden?

My cabbage was attacked by head rot because some of them split though most of the Mammath red rock was a-ok. Carrots have some bite marks but the beets look and taste fab. My alliums were raded by leek moth which not surprisingly nabbed all the leeks and left the perennial onions sparse. Garlic chives were more or less unaffected. This is the fourth year running that the chinese lanterns have kept the colorado potato beetle away from my solanums and I saw nary a cucumber beetle this year but then again I was away.

Worried that you may be afflicted? List of symptoms

Me and my blog

Ottawa Gardener
Ottawa, Canada
My passion is edibles especially those that take care of themselves. Our new garden is in rural Ottawa valley surrounded by woods. Learn more on Facebook. ottawagardener@live.com

Green Thumb Sunday
I will soon be placing the blogs I read most and other like minded blogs.